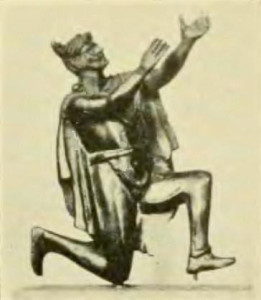 It was just an article I wrote because of the episode with the Jets and the female reporter that was in the news.  I didn’t really mean it the way you took it.  You know how I get sometimes.  And, no, I don’t really want to interview Anna Kournikova while she’s showering.  I was just kidding.  Besides I don’t have the proper press pass.

Me and the guys were down at Hooters having a few beers and watching the game when the subject came up about that hot attractive female reporter who wanted to interview Mark Sanchez, the Jets QB, you know quarter back.  So we started discussing it and one of the guys, probably Tommy (you know how he gets) starts sticking up for the guys in the locker room.  Well, it got pretty funny at the time but then again we had all been drinking beer.

When you got on my case last night about my column I realized that I had overstepped my bounds with those “reporterette” and “chiquita” cracks.  You know I love you, Sweetheart.  Please forgive me.  I was just trying to be funny.

Likewise about the sprayed on pants.  They weren’t really sprayed on but they were awful tight – not that that’s an excuse.  I’m just trying to explain myself and as to the “teats” thing I just couldn’t think of another acceptable term to use and the editor didn’t change it and she’s a woman so how wrong could I have been.

OK, let’s get to the “packages” part.  That is a modern term that’s used a lot in hip-hop these days so I used it to try to sound cool.  I thought my comparison of their “packages” to her “package” made it even cooler until I saw how red your face got when you read that line back to me.  I guess that was pretty stupid of me, huh?

But wait until I get home tonight because I know you’ll just love the little “package” I have for you tonight.  Wait!  I didn’t mean it that way but that is funny isn’t it.  See, I can be a little funny sometimes without even knowing it.   I meant the “package” I bought for you today at one of your favorite stores.  You’re gonna love it.  It’s an “asking for forgiveness” package.

And I totally get your indignation at the “feminist thingy” thing.  I got carried away while I was writing the piece.  You know I support equal rights for men too.  It was the beers, I guess.  “Thingy” seemed funny since I was writing about “packages.”  OK, OK!  I’ll let it go.  It was just a weak joke and you know my sense of humor (or lack thereof – ha, ha, ha.)

And Pandora’s Box that was funny too.  Even you lightened up when you read me that part remembering it as a children’s story.  It’s really a Greek tragedy but the important thing is that you got it.

And now to the other difficult part for me to explain…that “cubbies” reference.  I must have gotten that right because you got that too even though it gave you a migraine.  And, yeah, I can see how the scent thing could be taken the wrong way but I’m innocent of all charges on that one.  It was that bear analogy again.  I think I explained what the word “analogy” meant when we were discussing the differences between our mothers.  Remember?

And wasn’t that “Goldilocks” reference clever.  Oh, oh, and forget about the work “fecundity.”  I don’t really know what it means anyway.  It just sounded good and it had more than three syllables which impresses my readers (and my editor.)

You know I love you and respect your opinion that’s why I am replying so openly.  Please forgive me and can I sleep in our bed tonight?  The couch is lumpy like cellulite and it frigid cold out there this time of year.