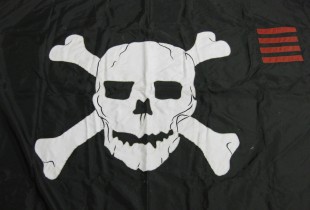 Not so Jolly Roger

Piracy, banditry, or any other self-serving tag line you want to apply to thieves in the act of burglarizing intellectual property (IP) is never romantic, or audacious, or heroic, Jack Sparrow with his bandanna, earrings and self-effacing grin be damned.

Recently, Julie Andresen started a discussion on Google+ entitled “What are your thoughts on content piracy?” She got over thirty comments with opinions varying from “piracy is great,” to one advocating a personally administered penalty of “trans-anal evisceration.” Most of the heat came from a handful of the respondents, who purported to be listening but obviously were not hearing one another.

Ms. Andresen started her discussion by including a reasoned post, entitled The Question of Piracy by David Amerland in which Google stresses the major, and oft repeated, argument for piracy, namely, “Piracy often arises when consumer demand goes unmet by legitimate supply,” which, of course, is really no argument at all. It attempts to justify lawlessness by blaming inefficiency. With this reasoning, any time your mail is late you could go down to the Post Office to raid their coffers.

Here are some of the (slightly paraphrased, intent intact) arguments  in favor of piracy from that post. No names have been attributed to prevent author embarrassment:

Notice that there is no real logic here. One excuse is offered after another, including some upside down interpretation of Marxism.

The main argument of this warped mentality is that if I want it, but it is unavailable for whatever reason, I will take it. This is akin to the argument that someone wearing a gold chain on a NYC subway deserves to be robbed, or that if a woman dresses provocatively and I desire her, I can rape her.

Their secondary argument is that piracy always has been and always will be, so I might as well participate.

And there is no shame.

Now, here are some of the arguments against piracy:

I am not neutral. I believe in the ownership of intellectual property. I know how much work it takes to produce a product. If time is money, than all the time an artist takes to produce a work of art puts a value on that work. The popularity of the work determines how much people are willing to pay for it.

In no case is it free.