Motorcycle joys mature with age and experience. Even though I was a fully grown adult when I start riding motorcycles I still had some growing up to do when it came to acting sensibly.

I had been interested in riding for years but no one I knew rode a motorcycle until the winter I got a job as a bartender down in Charlotte Amalie, St Thomas. My brother, Brian, was teaching school down there, riding his motorcycle to and from work. That was all the impetus I needed. My time had arrived.

At the age of 30, I purchased a 500cc Triumph Trophy. I taught myself the basics, with special emphasis on safety since I was scared to death of dying. Thus began my riding career. I have owned numerous motorcycles and I have been riding ever since.

Over the years, the joys I get from riding my motorcycle have matured. I still get a charge accelerating up steep hills. The roar of the engine is like that of a tiger just released from a cage expressing its need for freedom. But now when I get to the top of the hill I back off on the throttle a bit. Instead of continuing my hell-bent roar like I used to do early on, I look down the road ahead of me, the road I just crested, to see what lies beyond. If the road ahead is full of twists and turns and properly pitched pavement I might – no, I would – continue the roar. There is nothing like a good motorcycle road. Ahh! The Tail of the Dragon, Rte 129, down in Deals Gap, NC, 318 turns in 11miles. Whoo-whee! Now there’s a motorcycle road. OK…maybe I have not fully matured – yet.

I no longer take main highways either, unless absolutely necessary. I prefer the back roads as mentioned in the previous blog. First of all, you are not screaming down a four (six, eight) lane highway just to keep up with the chore-focused frenzy. Few folk are enjoying that drive. They have their eyes locked down the highway desperately looking for the off ramp. Where’s the off ramp… where’s the off ramp?

Highways are dangerous. Every road is dangerous but highways with their high speeds, wild-weaving traffic patterns, and wind-gusting monster trucks are particularly deadly. Yeah, a back road is a wiser choice.

For the most part I drive slower now too. I enjoy the ride more than the speed and it is a lot safer. Since the advent of cell phones/smart phones the dangers on the roads for all drivers have increased exponentially. This is especially true for motorcyclists. Drivers who text and drive are 23 times more likely to have an accident. And as if that isn’t scary enough, texting and driving is six times more dangerous than DRUNK DRIVING!

I live on Long Island, NY which is a densely populated area with way too much traffic. Except for extended trips with my brothers I seldom ride my bike anymore except for an occasional jaunt over the bay bridges to our barrier island where traffic is light and nature is near. Aside from the necessity for safety, slowing down also enhances sensory awareness. The Atlantic Ocean washes the shore there. You can see it, hear it, and smell it. 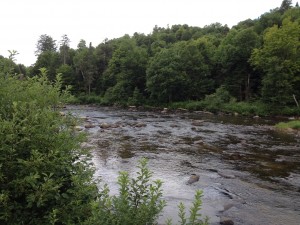 On our latest trip through the Adirondacks that sensory awareness was most welcome. I was able to enjoy glimpses of a high, thin waterfall cascading down a heavily-forested cliff side. I could hear the joyous shrieks of children splashing in the icy waters of the boulder-strewn stream that meandered alongside the roadway. I could smell the green of freshly harvested corn fields. The pungent odors of horse manure and a pancaked skunk wrinkled my nose before being left quickly behind.

I have also learned not to ride in the rain. That sounds like a no-brainer but it is not always possible to anticipate when and where you might encounter inclement weather. On this latest trip, we had the modern convenience of smart phones with weather apps. We had heard on the news that a violent storm was to pass through the area so when we left Fort Ticonderoga to gas up, we checked the weather.

An interesting aside here. Fort Ticonderoga is not a state or national park. It is privately owned and presently run by a non-profit organization, funded by donations and park admission fees. It was purchased by the Pell family and restored after decades of neglect. They have done a great job and the fort is worth visiting for its vistas as well as for its history, including reenactments of the Revolutionary War era.

But back to the bad weather. A front with heavy rains and high winds extended from Canada down to Long Island, and was headed east. We were headed west towards Saranac Lake and there was no way to punch through that front without encountering the storm. So we just stayed put for six hours talking about forgiveness. Motorcycle joys mature with age and experience. 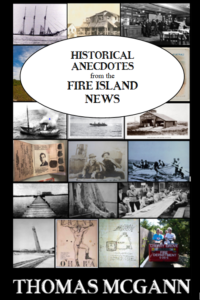